This article discusses the suicide of John Yoshida at the Jerome Relocation Center.

A verdict of suivide was rendered
Tuesday in the death of John Yos-
hida, 23, Japanese-American resi-
dent of the Jerome Relocation cent-
er whose body was found on the
Missouri Pacific Railroad's main
line between the center and Hud-
speth Tuesday morning.

Formerly a resident of Santa An-
nita, Cal., the boy was found decapi-
tated by J.W. Womack, section
forman. Apparently the boy placed
himself on the track before and
approaching train. A note left in-
dicated that he contemplated taking
his life.

He left his home Sunday and
members of his family reported to
the administration Monday that he
was missing. A search was begun
and his body was found Tuesday.
The boy lived with his father and
step-mother at the center.
----DN----- 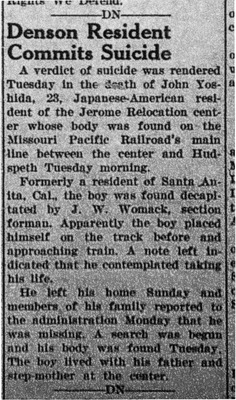