Homer Adkins, governor of Arkansas, is telling the Assistant Secretary of War John McCloy that allowing Japanese-American students into Arkansas colleges would present major problems. Adkins is worried that if Japanese Americans are allowed into "white" colleges, it could be used as a stepping stone for desegregation efforts in the state.

After the bombing of Pearl Harbor on December 7, 1941, President Franklin D. Roosevelt signed Executive Order 9022, creating the War Relocation Authority (WRA). The WRA selected ten sites in which to imprison more than 110,000 Japanese Americans, over two-thirds of whom were American citizens. Two of these centers were in the Arkansas Delta, one at Rohwer in Desha County, and the other at Jerome in sections of Chicot and Drew counties. Over 16,000 Japanese-Americans were incarcerated in these two centers between October 1942 and November 1945. John McCloy was hired as a consultant by Henry Stimson, the 54th United States Secretary of War, in 1940. According to Stimson, McCloy, more than anyone else, was the individual responsible for the decision to remove Japanese Americans from their homes and into camps. Homer Adkins was the thirty-second governor of Arkansas from 1941-1945. 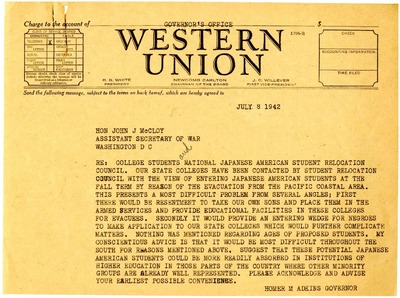