A resolution requesting the War
Department to designate the Jerome
Japanese Evacuation Center as
Camp Denson in honor of the late
Rev. Nick Denson was adopted by
the Rotary Club Tuesday. Rev. Den-
son was the founder of the Dermott
Baptist church and a prominent
citizens [sic] of Southeast Arkansas for
many years.

He was a Confederate soldier and
following the war, preached in Bap-
tist churches here and at Jerome
and many other points in this sec-
tion.

He died about 10 years ago. He
has two daughters and a son living
and one step-daughter, Mrs. C.F.
Skipper of Dermott.

Congressmen Oren Harris and
Congressmen Norrell requested the
local club to suggest a name for
the camp. 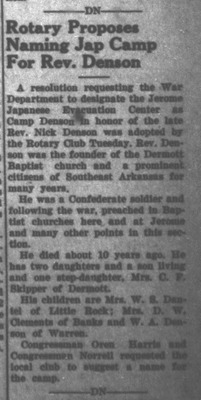