This letter discusses the interruption of students' education as they are moved around the country and how best to handle that interruption. The National Japanese American Student Relocation Council is appealing to the Arkansas State Teachers College to see if they would be willing to take in students from the internment camps.

After the bombing of Pearl Harbor on December 7, 1941, President Franklin D. Roosevelt signed Executive Order 9022, creating the War Relocation Authority (WRA). The WRA selected ten sites in which to imprison more than 110,000 persons of Japanese ancestry, over two-thirds of whom were American citizens. Two of these centers were in the Arkansas Delta, one at Rohwer in Desha County, and the other at Jerome in sections of Chicot and Drew counties. Over 16,000 Japanese Americans were incarcerated in these two centers between October 1942 and November 1945. Heber L. McAlister became the president of the University of Central Arkansas in 1930 but, he was granted a twelve month leave of absence in 1941 do to his National Guard unity being called to duty. Robbins Barstow was the first national director of the National Japanese American Student Relocation Council (NJASRC) beginning in May 1942. The NJASRC was created during World War II in order to help relocate the Japanese-American students into college campus in and around the relocation camps. 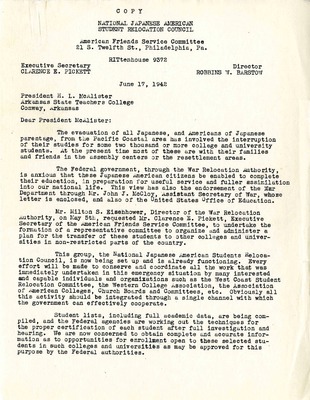