Letter from H.F. Thomason to David C. Williams about the results of the officer elections for the Secession Convention and settlement plans between those for and against the Union.

[Page 1] Little Rock, March 7, 1861.
David C. Williams:
The convention was
organized on Monday by electing Hon.
David Walker, President E.C. Boudinot
sec. J.P. Jones, ast. sec.____Hammord
door-keeper, etc.
The election for President was
a test vote and resulted Walker 40.
Totten 35. In fulton county there
was a tie vote and the delegate
from that county who voted in
the organization for Totten has been
excluded leaving Union delegates
in a maj. of 6.
There were polled in the guberna-
torial election about 60,000 votes and
the returns of the both election show
that only 41,553 votes were polled and
it is between that 4/5th of those who
did not vote are Union men.
Aggregate vote for Union delegates 23,626
" " " Secession " 17, 927
Union maj. of votes polled 5,699
Vote of counties representative by Union Delgates 26,700
" " " " " Secession " 15,767
over
[Page 2] Aggregate majority for Union delegates 12,300
" " " secession " 7,500
It is very manifest from the
above that the people of the State
were directly opposed to in-
itiate secession.
Nothing has been done as yet
except to settle rules for government
of Convention and appoint Com-
mittees. We have six committees
as follows: 1 On Federal relations composed of 13
2 On State Affairs " " 9
3 On Resolutions & ordinances " " 7
4 On Militia " " 11
5 On Ways & unions " " 5
6 On elections " " 5
the following are the chairmen
1 Lumer, 2. Mansfield, 3 Graer, 4.Yell,
5 Gunter, 6 Elections Hammond.
Our men stand firm &
I think can be relied on the
uttermost. some three or four delegates
who, as it is said were understood
at home to be very conservative
on acting so far with the secc-
sionists.
It is [illegable] [illegible] of every
[Page 3] or that this is the best body of
men we assembled in the state
and I can assure you they make
a very respectable apperance, and
I regret that some of them are
so radical and rabid in their views.
We have just rec'd good news
in a telegraphic dispatch from Messers.
Crittenden & Douglas to the effect that
there is hope for a fair settlement if
we stand firm.
South Carolina has her com-
missions here in the person of the
Hon. A.C. Spain & Georgia in the
person of Hon. D.P. Hill, both of
whom by county were invited
to take seats in the convention.
Mr. Totten of Arkansas Co. intro-
duced some resolutions this morning
and commenced a speech which
will be continued after dinner. They
are calculated to produce a warm
debate. In a day or two we
should be fully under way when
I shall have matters of more inter-
est to communicate, or what is
better by way of keeping you generally
posted I will send you the Daily True
Democrat containing the proceedings
[Page 4] of the conventions, i.e. the substances of
these with partiality for the secession
side of the house, and will write you
when any thing special occurs. Am well, of which please inform
my wife.
Very Truly
H.F. Thomason
P.S. Don't understand me to recommend
to your approval anything
in the Daily by way of news
out side of conventions pro-
ceedings for it eventually is the
most outrageously dirty little sheet
that our poisoned (illegible)
here of as healthy state of public
sentiment. 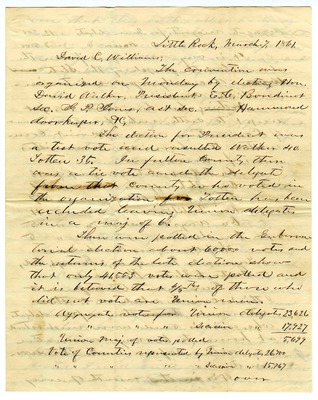