[Page 1] Ozark Ark. March 3rd 1861.
Hon W.W. Mansfield
Dear Sir:
I sit my self
down to day, Sunday as it is, to drop you a hasty
line. I am rather of the opinion that Mr. Berry did
not make the necessary arrangements about getting
the missing volumes of the Supreme Court Reports.
They are from 1 to 12 inclusive. I perceive they
can be bought at Jacobi cheaper than of Rearden
If there is not more than a dollar per volume
differance[sic] in the prices, I would prefer those bound
in calf skin. Well, tomorrow is the ominous
day day[sic]. It will possibly be a day long to be
remembered by the people of Ark. and by the people
of the United States. In the language of the Roman
Augen(?), the ides of March have come, but not
passed. It is to be feared that an attempt may
be made to prevent the inauguration of Lincoln.
This could do no good, but might be productive of
very much harm. From the returns which we have
received, I presume there is little doubt but that
a majority of the delegates will be conservative.
And if the convention should think proper to pass
an ordinance of Secession, it will be referred
back to the people for their approval or disapproval
We have no late news here as to what the Border
State convention has done. There was some slight
intimations in a slip from the Fort Smith papers, that
an adjustment had been made, that was thought
to be satisfactory to the Border States: but we have
not had any more news on the subject since.
So that we remain in ignorance (not blissful
I hope) of what is going on in the Capital.
You will, of course, be posted on everyday with the
[Page 2] very latest news from Washington. It is to be found
that from Lincolns line of policy that he will
attempt to collect the revenue at Charleston, and
other southern parts. This will, in my opinion, be
looked upon, and treated by the southern States as
equivalent to a declaration of war. And there
will no doubt be a measuring of arms between
the South Carolinians and the federal troops at Fort
Sumter, if it is not given up to the authority of
S.C. I think that any attempt to blockade the
ports of the southern States, will be crossing the
Rubicon. Although I am willing to acknowledge
that S.C. has acted hastily, and it may to some
considerable extent wrong: Yes I have too much
southern blood in my veins, to sit quietly down,
and see her contending with the Abolition hordes of
the north, and not wish her God-speed. I have but
little doubt, but that Genl Davis, the newly elected
president of the Confederacy, will demand, in language
strong & emphatic, the surrender of Fort Sumter: And
if his request be not complied with, an attempt
will be made to take it by force of arms.
We are living in the midst of trying times. Great
events are so constantly transpiring, that we do not
appreciate them. One unlucky spark would now
touch off the magazine, and build up a gulf wider
than that which existed between the rich man Dives
and Lazarus. But we must try to prevent that
calamity from taking place: and it is to be hoped
that every person in the government will realize
that he is responsible, at least to some extent, for
the way in which the ship of State, and the glorious
old Union, are to be conducted in future.
I must confess that I have not as much confidence
in my own judgment, as I have usually had.
[Page 3] When I look at the blessings the Union has conferred
on us, I feel like it would be almost sacralege
to even think of seeing it dissolved. Again, when
I look at the wrongs and indignities that have been
heaped upon us, in newspapers, pamphlets, & even
stereotyped in books. I can hereby maintain my
conservative position. I am afraid that having once
divided, it will be easy to get up new divisions, until
we will be like the little Republics of South America.
I shall wait with much impatience and anxiety, the
inaugural address of Lincoln. It will, in my opinion,
either inspire new confidence, and give us new
and strong hopes of an amicable adjustment of our
difficulties, or otherwise, it will destroy all that is
left, and place us in a condition to know what we
may rely on. In a word, I think that war, with
all its horrors, that send a chill to the very heart;
or peace, and restore confidence, which will
cause one shout of joy to go up from each
and every true patriot in the land, to the great
dispo(?) of human events. But I have already
trespassed on your patience. Nothing has transpassed
since you left worth telling. The River is getting down
again, and I fear that there will not be much
boating going on for some time.
Drop me a line, and let me know
what your convention is doing.
Very Truly
Your Obd't Servt.
D.W. Lillingim 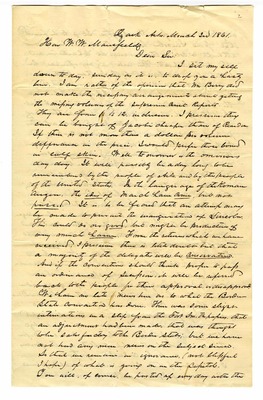