Letter from W.F. Holtzman to David C. Williams describing the difficulty in preparing material for the Gazette, as most of the journeymen have left to join the army. Topics also include Tennessee's vote against secession.

[Page 1] Gazette Office
Little Rock
Feb. 10, 1861
D.C. Williams, Esy
Dear Sir
Some ten days ago we rec'd
a letter from you, or rather Capt.
Dunley, who was about taking
his departure did. We should
have published a position of it
and shall yet do so, only the
excitement which has been kicked
up, almost entirely cleared out
our office, all 3 of our journeymen
being compelled to go out on
military duty, and consequently
we have not been able to put
manuscript in type to as great
an extent as we would have
wished.
We learn here to-day,
and hope the news will be
pretty generally disseminated
west, that Tennessee has
gone for the union over-
whelmingly-Nashville by
3,000-and that Borland
(disunion) has been beaten
in Memphis 100 votes.
[Page 2] Stillwell and Garland will be elected
by an overwhelming majority-Saline
will come in conservative. I trust
that your letter in the Van Buren
press has received a general
circulation, and that the great
west will send down men
who will not be browbeaten
and overruled of their rights.
The excitement which has
been gotten up in this city
the last 9 days was to effect
this election-nothing else-
but we thnk it has had a
contrary effect. We believe
if the people will come out
we are safe-and we will
put our trust in their intelli-
guence-in the brave hearts
and bold intellects which they
may send here on this greatest
of all occasions
yours truely in the faith
W.F. Holtzman
1861
W.F. Holtzman
Lb10
N. 94 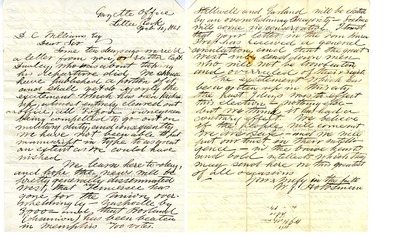