In her letter, Mary E. Weaver sends her son news from Little Rock, describing how the town "looks deserted" and including descriptions of an Arkadelphia company drilling at the arsenal.

During the beginning of the Civil War, family of soldiers wrote to their loved one's who were fighting on the battles fields. They would update them on what was happening back home, or about those wishing to contact them. However, as the war progressed, communication became much more difficult and unreliable. Omer Rose Weaver, First Lieutenant in Woodruff's Battery, was killed at the Battle of Oak Hills in 1861, one of the first Arkansans to be killed in the Civil War. Mary Eliza Weaver re-married, wedding Benjamin Johnson Field. The Weaver and Field families lived together at Number 311, East 6th Street, Little Rock, Arkansas.

[Page 1] [postscript] In your next tell me what your mind was "wool gathering"
about - what troubles my poor boy? I am afraid I will
borow more trouble than I shall ever be able to repay back
Little Rock.July 23 / 61
My Dear Boy.
Yours of the 10 inst. came to hand in
due time, your Pa wrote you a few days afterwards,
by Mr McPherson. I waited until after sunday to write
thinking I might have a message or something
else from a certain damsel to send, but Dr
Wheat was too ill to have service; Last sunday
week she came to me after service, and asked "If
I could still write to you" (Thinking I suppose above
had heard you were in Missouri, that you could not get
letters). I merely answered the question, as we were in
a crowd, and the inquisitive eyes of a certain Miss
were turned upon us. _ _
Today I received another
most welcome letter from you, by Mr. J. Williams.
I can't complain of you, as you appear to write by every
opportunity; continue to do so, you don't know
what pleasure it gives me to read your letters,
I wrote three letters to you, directing them to
"Osage Mills, P.O." by direction of Lieut Brown,[Page 2] which I fear you have not received, as you have
not said anything about one of them, which
I rather suspect you would give two bits to get,
I know it cost me ten cents "do you see the point"?
have you received the letter from me with a note
enclosed in it for you, from Mary? if you have,
that is not the one I mean; there is still
another one. in your next, do tell me, if you
have received them. _ _ _ _
I delivered your message
to Ellie about writing to you; _ _ as to the boys
that are left, they are "very few, and far between
Ros. Beebee is here (if you can call a married man
a boy) I intend to see him and request him
to write. will also give him some items; _ _ our
city looks deserted. _ _ it seems like sunday all the
time. _ _
There is a fine company of artillery, from
Arkadelphia, at the Arsenal numbering 120. they
were drilled by one of our preachers; Da. Carr, who
was here last winter. _ they are said to be the best
drilled company, that has been here; of course I [Page 3] mean since the "Pulaski artillery" left. _ no one shall
take the palm from our home artillery; in my presence,
after the praise bestowed on it by the Van-Buren press.
it does my heart good, to see our church, taking
such an active part, for the "sunny south" it goes
to proove, they feel, our cause to be a just and
holy one. _ _ I was much amazed at Mrs"
Wheat, who has recently returned from Memphis,
she was very anxious to stay, until after the arrival
of Bishop Polk, (you know he is Brigadier Genl.
now) she added, "I wanted to hear him preach, put
his surplice on over his buttons, and take for
for his text the 144 Ps. 1 verse". "Blessed be the Lord
my strength, which teacheth my hands to war,
and my fingers to fight" God bless her, she is a true
patriot. _ _
O! what would I give just to have one
peep at you; just two months today since you left.
it seems to me a year. - I never go to bed at nights -
without thinking of my dear boys, whose beds
are blankets on the ground, [and] any sort of pillows,
I never sit down to the table, without thinking[Page 4] about my poor boys. - in fact I am thinking
of you all the time. - but I will try to put my whole
trust [and] confidence, in the mercy of "our Father who
art heaven" hoping he may answer my prayer, for
the safe return hom of my dear boys. -
George in his
last wishes me to ask you to write to him, direct to
Capt Peay's Co. 6th Regiment Infantry.
Pocahontas.
Arkansas.
your Pa says "tell Omer to write, often, and tell
all particulars about matters [and] things in
general, movement of troops", etc. he's so anxious
to hear from you often. - - we hear some very
crooked statements, sometimes.
My respects George Merrick.
God protect you
my dear boy, and the whole army of the Confederated States
your affectionate
Mother
M. E. Weaver. [Page 5] [Lieutenant] O. R. Weaver.
Pulaski Artillery
Camp Walker
Benton[ ] Arkansas.
Favour by Mr. Williams 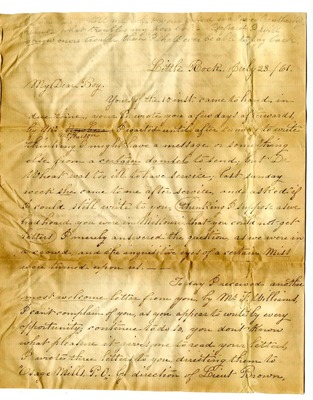