Letter from T.H. Holmes in Camden to Governor Harris Flanagin in Washington, Arkansas. Holmes tells Flanagin of 400 or 500 Union troops moving on the Hot Springs Road. He is concerned that with the recent capture of a company of Confederate troops that preference will be given to Confederate troops over State troops in prisoner exchanges.

[Page 1] Camden Feby 13th/64
My Dear Sir
The Federals reported by
your scouts with a party of 300 or 400
who returned up the Hot Spring road
I supposed was merely a scout of obser-
vation as I have heard of nothing that
they did, I heard incidentally that Col
Williamson of your Troops had be[sic] killed
and the greater part of his co. captured
this may produce a complication
the injury of the prisoners that did not
occur to us in our arraignment in
accepting state troops. The doubt with
me is whether the Federals will not make
a difference in the states of States[sic] Confe-
derate prisoners and as they have an
excess whether a preference will not
be given to Confederate prisoners [Page 2] when the time for Exchange comes, I
do not know that any difficulty of the
kind will occur though it may be as
well for you to consider it in time
that delightful weather we have and
have had. Provedence[sic] [illegible] to provide
for us trans Mississippians the way to ava-
il ourselves of the Enemy! Tis(?) Mississippi
designs & concentrations before they
can complete their operations from
Vicksburg towards Jackson & (?)
we could easily concentrate and drive
them from Ark, I have [illegible] this
opinion on Genl Smith and sincerely
hope he will act upon it as it is
not yet too late to subsist in the Ark [illegible]
If something of this sort is not done
I shall look on my occupation in Ark
as gone as I do not see in what I
can further be useful
I am yr [illegible]
very respectfully
His Exc
H Flanagin 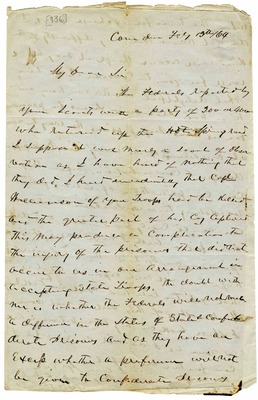