This is a grand jury indictment of John P. Maxwell for selling six gills (1 1/2 pints) of whiskey to an individual from the Delaware nation of American Indians.

The manufacture and sale of alcohol has been a topic of contention since the establishment of the Missouri Territory. In 1817, John Maxwell used leftover grain to make whiskey like many farmers did. He then proceeded to sell 6 gills or 1 1/2 pints to an individual from the Delaware nation of Indians. However, the sale of liquor to American Indians was illegal at that time. Maxwell was charged and found guilty of a crime as a result.

Territory of Missouri County of Lawrence: In the Circuit Court November term
year of Christ eighteen hundred seven
teen
Towit
The Grand Jurors enbounded[sic] charged and sworn to inquire in and
for the body of the said County of Lawrence upon their oaths pre
sent and say that one John P. Maxwell late of said County on
the twentieth day of October year of Christ eighteen hundred sev
enteen at the township of Columbia in said County did most- - -
fuly sell and deliver to a certain Indian of the Selaware
tribe then and there being
certain spirituous liquor commonly called whiskey to wit of the quanti
ty of six gills[sic] of the value to wit of fifty cents
contrary to the form of the statute in that case made and provided
and against the peace of the United States and of this county
John D Cook Circuit Attorney
We the jury find defendant guilty
Sam W- - - 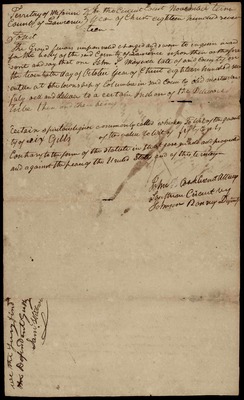