This is a justification submitted by Benjamin Crowley claiming that he is owed the entirety of his son, John Crowley's estate.

Benjamin Crowley was an early settler of Lawrence County and the man for whom Crowley's Ridge is named. His son, John Crowley, died as a young man in Lawrence County. His father served as administrator and submitted this document as justification for retaining his son's entire estate. Essentially, Benjamin Crowley claimed that for the cost of raising his son and the three slaves he gave to his son as well as for miscellaneous business expenses, Benjamin was entitled to all of his sons's belongings. Considering that John had no heirs and was so young, it was not unusual for his father to absorb all of his possessions. 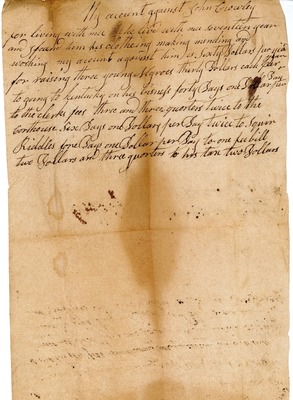