This is a complaint filed by Henry Cassidy acting as attorney for John Hudgens against Jacob Fortenberry.

Before cars, horses and mules were prime transportation options. Additionly, a healthy horse could be an invaluable farm asset or racing commodity. In this case, John Hudgens bought an expensive stud horse named Rising Sun from Jacob Fortenberry only to discover that the horse was ill and unable to breed. Considering the steep price of the horse, over $300 in 1815, it must have had good stock and proven itself a fine animal. Hudges accused Fortenberry of knowing the horse was sick and sued Fortenberry for his money back.

Territory of Missouri County of Lawrence
In the Circuit for September 1815
John Hudgens by his attorney Henry Cassidy
complains of Jacob Fortenberry of a plea of Trespass on the case
for this that whereas the said John Hudgens upon the first
day of April in the year of our Lord one thousand eight
hundred and fifteen at the County of Lawrence aforesaid
had bargained with the said Jacob Fortenberry to buy
a certain stud horse called the rising sun of the said Jacob
Fortenberry. The said Jacob Fortenberry, knowing the said
horse to be unsound subject to a disease called fits - - -
in his loins and unfit for a covering horse, or other
service, then and there by warranting the said stud
horse to the said John Hudgens to be sound in all
respects falsely and fraudulently sold the said stud
horse to the said John Hudgens for a certain sum
of money, to wit, for the sum of three hundred
and seventy dollars. Whereas in fact the said horse
at the time of the said warrant and sale thereof was
unsound and diseased of which disease and unsoundness
he has since died to wit at the county aforesaid
whereby the said John saids he is prejudices and hath
damage four hundred dollars therefore he brings his
suit and so forth by Henry Cassidy his atty[sic - attorney] 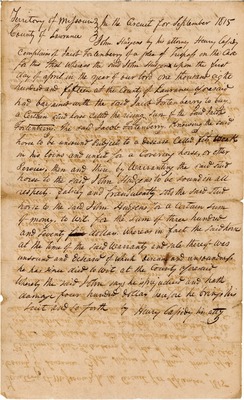