This is a certified copy of the court proceedings of Eli Hillhouse v. Henry Cassidy, written by Alexander Hodge, justice of the peace.

Eli Hillhouse was a wealthy man in early Lawrence County. Evidently, he lent money or allowed Henry Cassidy to purchase items on credit, and as a result Hillhouse had two promissory notes signed by Cassidy. Henry Cassidy was a successful lawyer who spent much of his time in St. Louis and traveling throughout the new territories often on behalf of merchants. Hillhouse alleged that Cassidy failed to pay his promissory notes, although Cassidy contended that one was paid, while admitting that the other was not. Unfortunately for Cassidy, the court ruled that lack of evidence of payment meant he had to pay both to Hillhouse.

Missouri Territory Lawrence County Spring
River township - A copy of proceedings had in
a case wharein[sic] Eli Hillhouse is plaintiff and
Henry Cassidy Defendent[sic] is as follows vz--
upon the 24 day of June in the year 1817
Said Hillhouse made aplication[sic] to me a Justice
of the peace for said County for a forthwith warrent[sic]
against Henry Cassidy and after makeing[sic] oath
as the law directs in the such cases a forthwith
warrent was granted and the said Cassidy was
brought forward and two notes being presented
the one for $8.62 1/2 cents which Said Cassidy
confessed was Just the other note for $45
which the Said Cassidy Said was not Just
but there being no witness to prove the note
paid or any part thereof Judgement was
enterd[sic] up against Henry Cassidy for fifty
three Dollars sixty two and one half cents and
Costs - - - Justice Costs - . . I 75 I
June 8th 1817 - - - - Constable Costs $ . . I 37 I 1/2
Eli Hillhouse
v.
Henry Cassidy
I do certify this to be a true
copy taken from my pocket this
first day of november[sic] in the year 1817
Alexander Hodge Justice of the Peace
for a certified copy fifty cents 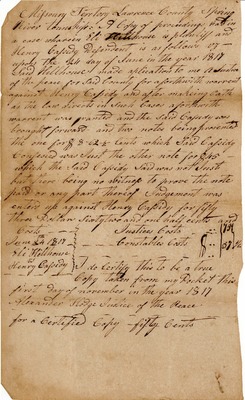