This is a deposition given by Antoine Porcelli, a boat hand, to Joseph Pamier, a justice of the peace in St. Louis, Missouri, in the case of Christian Wilt v. Elizabeth Luttig and Moses Graham. The back of the deposition which shows holes where a ribbon sealed the document closed for delivery from St. Louis to Davidsonville.

John C. Luttig ran a store near Polk Bayou on the White River in Lawrence County. Christian Wilt was a wealthy merchant headquartered in St. Louis, Missouri, who provided the stock and supplies for Luttig's store. After Luttig's unexpected death, the administrators of his estate attempted to take charge of all the goods from the general store. Moses Graham and Luttig's wife Elizabeth were swiftly blocked by Wilt. He dispatched lawyer Henry Cassidy to file lawsuits against the administrators in order to win back possession of the goods. This particular deposition from Antoine Porcelli, who accompanied Luttig on several supply runs up the White River, gives an incredible glimpse into the burgeoning frontier and bustling river trade that was taking place at the time.

[Page 1] In the circuit court
County of Lawrence
Christian Wilt
v.
Moses Graham and Elizabeth
Luttig, admrs [sic] of John C. Luttig dec [sic]
Depositions taken at the office of Joseph Pamier one of the
Justices of the peace in and for the proud city of St. Louis in the county
St. Louis on Monday the sixth day of May in the Year eighteen-
hundred and sixteen by virtue of a - - - and - - - filed out
of the office of the clerk of the circuit court of the county of Lawrence
the fifteenth day of february [sic] in the year eighteen hundred and sixteen
and to be read in evidence in the Trial of a case wherein Christian
Wilt is Plaintiff and Moses Graham admr [sic] and Elizabeth Luttig ad
ministrator of all and singular the goods and chattles, rights and
credits which were of John C Luttig deceased-
Antoine Porcelly of lawful age being sworn on his oath
saith that he went twice as a boatman with John C Luttig to
the settlements on the White River that he also went twice by land
with said Luttig to said settlements - that in going to said
settlements, the two first voyages the said Luttig took with
him goods, which were taken out of the store of Christian Wilt
in the town of St. Louis and carried on board of said Luttig's boat
that in going down the river he took out of the store of the Plaintiff
at Herculaneum a double barrel of whiskey which was also
put on board of his said boat that he the deponent was
paid by the Plaintiff for the three last trips - that for the forth [sic] trip he was
paid by the said Luttig in the store of the Plaintiff in St. Louis. That
on his virtue from his second trip to said White river settlement, he the
[Page 2] Deponent was the bearer of a letter from said Luttig to the
Plaintiff and was informed by said Luttig that said letter contained
a demand for more goods from said plaintiff which he
was directed by said Luttig to bring to him in a - - - that
the said plaintiff not having the goods called for in said letter
he sent him the deponent back and gave him a --- to
bring back the boat, which then laid at the said settlements
that the - - - he received for said plaintiff as well forhis
wages as for his expenses in going to White river amounted in the
whole to three hundred and thirteen dollars and three 1/2 cents That
on the first day of June last he took down to said Luttif from the said Plaintiff two Packs of goods, some steel and was also
the bearer to him of a letter endorsing the sum of four hundred
and thirty dollars - which he the deponent delivered to said Luttig
that the day before the death of the said Luttig, he called to him
, the deponent, together with one Robert Bean and James Moore
that the said Luttig enquired of him the deponent if he could go
for him to St. Louis and turning afterwards to Beam and Moore he
asked them respectively whether he Bean or Moore's - - - would,
in the event of his death, go to St. Louis - that upon receiving an
answer in the affirmative, he then told him the deponent, that
in case of his death he is granted all his books and papers to be
put under seal sent to the said Christian Wilt at St. Louis that he the deponent should remain with
the said Luttig's wife to take charge of his things until
the Plaintiff should send down person to take possession
of the same and settle his affairs - and further saith not
Sworn to - - - this
6th day of May 1816 before me
J.C. Pamier JP StL.C. [Justice of the Peace St. Louis City]
Antoine [his X mark] Procelli [Page 3] The Clerk of the Circuit Court
County of Lawrence

Joseph Pamier, justice of the peace 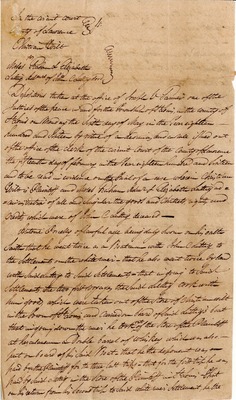