This is a penal bond of two hundred dollars for William Hix, Perry G. Magness, and William Harris to operate a ferry on the Current River.

William Hix, Sr., and his family were among the early pioneers of Lawrence County. Hix Ferry on the Current River became a well-known location. Later purchased by Peyton R. Pitman and called Pitman's Ferry, this site was instrumental in transforming Randolph County into an assembly area during the Civil War. This is also the location where the highly traveled Southwest Trail or Military Road came into Arkansas.

Know all men by there presents that We, William Hix
Sen.[Senior] Perry G. Magness, Esq.[Esquire] William Harris Esq. are held and firmly
bound to the County Treasurer of the County of Lawrence and his
Successors in office for the time being in the Sum of Two hundred
Dollars for payment whereof well and truly to be made, We bind
ourselves our heirs, executers[sic] and administrators, jointly and severally[sic]
firmly by these presents Sealed with our Seals the twenty sixth
day of April one thousand eight hundred and fifteen.
The Condition of this obligation is such that whereas
the Honurable[sic] the County Court of the County of Lawrence
did on the Twenty Sixth day of April grant a licence[sic]
to keep a Ferry on the Current River to the above bound
William Hix Sen._ now if the said William Hix Sen. does
Keep a good boat or boats in good repair, Suitable to the water
they are to ferry over, and give Early and due attendance on passengers
on all occasions, and shall give the like attendance when waggons,
carts, horses, or other things are to be transported then this obligation
to be void, otherwise in full force._
William Hix
Perry G. Magness
William Harris
Signed and Sealed in
presence of._
Lewis de Mun Clk.Cty.Ct.[Clerk of the County Court] 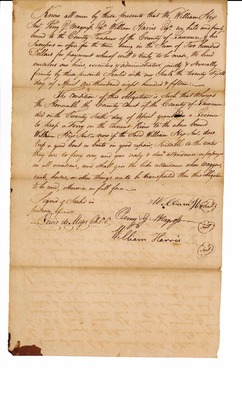