This document is an indictment for perjury against Robert B. Musick. It is noted by the foreman, Eli Hillhouse, that the jury found it to be a true bill or an accurate statement of facts.

Robert B. Musick was among the early Pioneers in Lawrence County, but eventually settled in Hempstead County in southwest Arkansas. In this court case, Musick is accused of lying under oath about having knowledge of a note he was said to have given to George Ruddle for the sum of twenty-three dollars and ten cents. The language used in this document is also a great example of the changes that legal language has gone through over time with the use of words and phrases such as "wickedly," and "against the peace and dignity of the United States and this Territory." 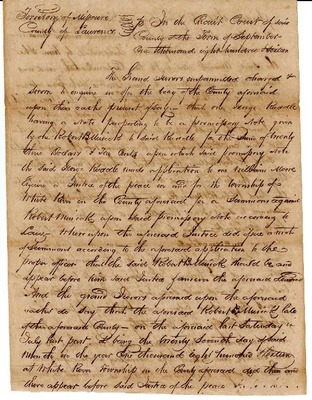