This document is a deed of sale between Solomon Huitt and Benjamin Crowley for the sum of two hundred dollars for land and improvements along the Spring River about two miles above the mouth of Eleven Points.

Benjamin Crowley is for whom Crowley's Ridge is named. After arriving in Arkansas, he and his sons settled on the ridge and soon were followed by many other relatives and friends from the east.

Know all men by these presents[sic] that I Solomon
Huitt of Lawrence County Arkansas Territory have
Granted bargained and sold unto Benjamin Crowley
for the Consideation of two hundred Dollars a
certain settlement and preemption right situate
on Spring river about two miles above the mouth
of Eleven points on the north side of said spring
river which said improvement was made by the
said Soloman Huitt and sold by him to the
said Crowly on which the said Crowly now lives
To have and to hold the said settkement
and improvement _ together with the right of
preemtion thereto[sic] to the said Benjamin Crowly
and his assigns _ with all the rights binefits[sic]
pr--d-gs and advantages therunto[sic] bulonging[sic]
or in any wise apper laming[claiming].
In witness whereof I have hirunto[sic]
seat[sic] my hand and seal this 12th day
of October 1819
Solomon Nuitt [his seal]
In presence of Richd.[Richard] Searcy
Territory of Arhansas[sic]
Lawrence County
On this 18th day of October AD 1819
the above Deed was filed for Record and is recorded in book
B folio 125 and 26
Richd. Searcy clk[clerk]

[sideways writing] Sol[Solomon] Huitt
to
Benj[Benjamin] Crowly
DEED
Filed October 13th 1819
recorded in Book B
folio 125 and 26
R Searcy clk
clk fee for Record $00 30
Certificate and seal .50
--- fee 50
$1.80
(note the light thumbprint left under the writing)
Arkansas Territory
Lawrence County
ss
Personally appeared before the undirsgind[undersigned]
a Justier[sic] of the peace in and for the County aforsaid[sic]
the within named Solomon Nuitt and acknowledged
that he signed sealed and delivered the within
Deed of Convyance for the --- and purpos[sic]
therein mentioned
Given under my hand this 13th day of
October AD 1819
Richd. Searcy JP[Justice of the Peace] 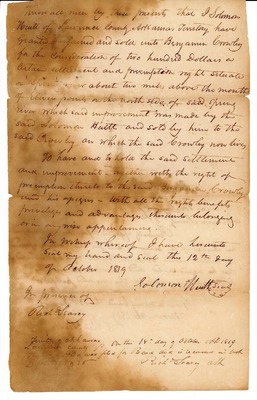