This is a petition for divorce between Jane Dodge and Israel G. Dodge.

Contrary to some beliefs, divorce has long been a legal option in the United States. One item of interest in this case is that Jane Dodge was represented by "her next friend," William Moore. At the time of this case, women were not considered to have full social or civil rights and the capacity to manage their own affairs. Therefore they had to appoint a man to represent them in court which was referred to as a "next friend."

(page1)
To the Honorable the Circuit Court in and for the
County of Lawrence in the Territory of Missouri
The petition of Jane Dodge of the County
aforesaid by William Moore her next friend of the
County and Territory aforesaid
Respectfully S -erreth
That in the fond hope, and well founded
expectations of enjoying happiness and protection
your petitioner was on the twenty Eight[sic] day of
March in the year One thousand eight hundred
and fourteen lawfully married to one Isreal
G Dodge at the County of Ste[sic] Genevieve; that
for some time your petitioner enjoyed that protection
from her said husband until he left her as herein
after stated; That during the time she lived with
him her conduct was that of a virtuous, Kind
and affectionate wife towards him: that the said
Israel imenible[sic] to her exposed situation, and
disregardless of his sacred vows to his said wife__
and the duty which he owed to her. To God, and to
the Laws of his County on the Tenth day of March
(page2)
In the year One thousand eight hundred and fifteen
without any reasonable or just cause whatever wilfully[sic] and
maliciously deserted, and absented him self[sic] from your
petitioner, and has ever since that time So continued
to desert her and absent himself from her and that is to say
for and during the space of two years and upwards; thus
leaving your said petitioner to be exposed to all the
wants of life, without that support her necssities[sic]
requires, and without that protection so essentially
necessary[sic] to one in her deplorable situation__
Therefore for the causes above mentioned__
(and in as much as your petitioner has resided for more than
one year in the Territory) She respectfully prays that
a Divorce may be to her granted from her said husband
Isreal G Dodge by your honorable Court_ not only from
bed and board, but from the bands of matrimony themselves
And that your writ of Summons may issue according
to Law - - - - and she - - - Jane Dodge
by her next friend
William Moore
(page 3)
Territory of Missouri
County of Lawrence
ss
Personally appeared before
me the undersigned a Justice of the Peace in and for the County
aforesaid the forgoing Sibellant[sic] Jane Dodge who being
duly sworn says that the fact's stated in the said
petition are true to the best of her Knowledge and belief_
and that the said complaint is not made out of levity
or by collusion, fear or constraint between her and her said
husband_ and for the mere purpose of being --ced and separated
from each other. but in sincerity and truth for the causes
mentioned in said petition
Jane Dodge
From to and subscribed before
me this twenty fifth day of July- 1817
William Moore J.P.
Territory of Missouri
In the Southern Circuit
ss
The United States of
America to the sheriff of Lawrence County
Greetings
You are hereby commanded that you summon the
within named Isreal G Dodge if he may be found in your bailiwick so that
he personally be and appear before the Judge of the Circuit Court in and
for the County of Lawrence aforesaid at the Town of Davidsonville, at a
Circuit Court to be - - - held in and for said County on the first Monday
in November next - - - - - - - to k---- the Li--- or complaint of the above
named Jane Dodge by her next friend William Moore_ of - - - you then - - -
Certify how you - - - execute this writ, and have you then there
this writ___
In testimonywere of I
(page4)
I Richard S Thomas Judge in aforsaid[sic]
Southern Circuit have here unto set my hand and seal
this 10th__ day of August AD 1817 and of our independence the 42nd
R.S. Thomas
[sidways writing] No 3 ! T.[term] March 1818
Jane Dodge
I G Dodge
Not found
Joseph Hardin DgLC
the Said Isriel[sic] Dodge
is not an inhabitant
of this County
Joseph Hardin DJLC
Filed 3rd 1817
Rich Searcy clk[clerk]. 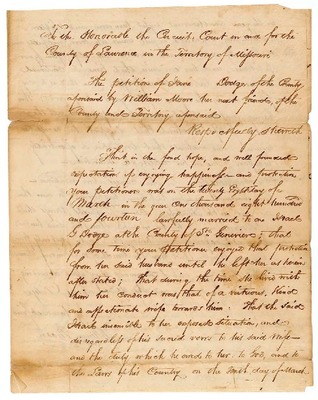