This document is a deed of transfer between Jacob Garrett and Spencer Crouch for lots number thirty-five and thirty-six in the town of Davidsonville.

Davidsonville operated as the county seat of Lawrence County from 1815-1829. The town was plotted out in a square as was common at the time, and benefited from river travel. Jacob Garrett owned two of the lots on the northeast side of the public square but transferred ownership to Spencer Crouch.

This deed made this 17th day of November
in the year of our Lord eighteen hundred
and twenty one between Jacob Garrett
of the one part and Spencer Crouch of
the other part witnesseth that the said
Jacob Garrett for Divers[sic] good causes
and conciderations[sic] him hereunto moving
hove[sic] this day Given Granted bargained
and sold and by these presents doth
Give Grant bargain and sell unto
the said Spencer Crouch two certain lots of Ground situate lying and
being in the Town of Davidsonville
and Designated and known in the
map of said Town by lots No[number] thirtyfive
and thirtysix to have and to hold the said lots
of ground to him the said Crouch
his heirs and assigns forever and the
said Jacob Garreet[sic] for the consideration
aforsaid doth hereby assign over and
transfer to the sd.[said] Crouch a certain covenan
=t made and executed by Jason Chamber
=lain in his lifetime for the securement
of a title to said lots so far said
covenant concerns the title to said lots
Number thirty five and thirty six And the said Garrett doth hereby
authirese[sic] the said crouch to have and
use all lawful ways and means in his
the said Garrett name and for his
(back-part 1)
The said Crouchs[sic] own proper use and
benefit to obtain a title to the premeses[sic]
aforsaid --ttifging and connfirming
whatsoever he may do in the premises
In Testimony whereof I have hereunto
set my hand and Seal the date above
written
Jacob Garret
- - -
Jacob Fortinbury[sic]
Sammuel Sto---
J Garrett
to } Deed
S Crouch
[upside-down writing] January Term 1822. Circuit court. Lawrence county. ss
Personally appeared Jacob Fortenberry a subscribing
witness to the within deed and says that he saw Jacob
Garrett the within grantir[sic] sign seal and deliver
the within deed to Spencer Crouch and at the
same time acknowledge the land and premises
therein mentioned to be the right testate of him
the said Spencer Crouch his heirs and assigns
forever. - - - in Open Court
Hy Sanford clerk
(front-part 2)
Territory of Arkansas
Lawrence County
fs
Be it remembered that
on the 17th day of January
A 1822, the within deed was filed for record which
was the same day Recorded in folio B. --- --- ---
Hy Sanford clerk[sic] and
Ex officio recorder of
Lawrence County a.z
Jan________----
Recordi-d--- --- 15/100} 46 20/100
Certificate and seal____20__
Acknowleagment___50
$1.66
(back-part 2)
Jacob Garrett
to
Spencer Crouch
Deed
Lots 35 and 36 in Davidsonville
Recorded in Book B p.369.370
fee $1.00 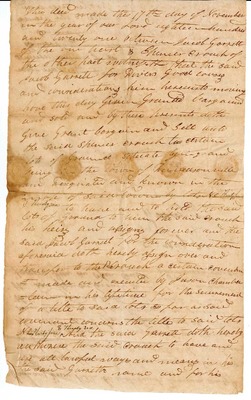