This is a motion to arrest the judgement against John P. Maxwell.

The production and sale of alcohol has been a contentious matter in moral and legal affairs for centuries. In the early United States, it was illegal to sell alcohol to Native Americans. In November 1817, John P. Maxwell was found guilty of selling 6 gills, or 1/2 pints of whiskey, to a Native American of the Delaware tribe. However, in July 1818, his counsel, Chamberlin and Davis, requested that the court stop the judgement due to mitigating factors in the evidence: firstly, that the name of the Delaware man was unlisted; secondly, the amount of compensation, if any, Maxwell received in exchange for the whiskey was unspecified. The outcome of his attempt to arrest the original judgement is unknown.

John P. Maxwell
ads.
United States
Lawrence Circuit Court,
of the term of July
in the year of our
Lord one Thousand
eight hundred and eighteen,
And the said John P. Maxwell comes
and moves this honareble[sic] court to
arrest the judgment[sic] in this case
for the following reasons, to wit,
1. The Indictment aforesaid does not
mention the name of the Indian to
whom the liquor was sold.
2. It does not appear by the Indictment
aforesaid what compensation was
received for said six gills of whiskey.
chamberlain and Davis counsel
for defendant 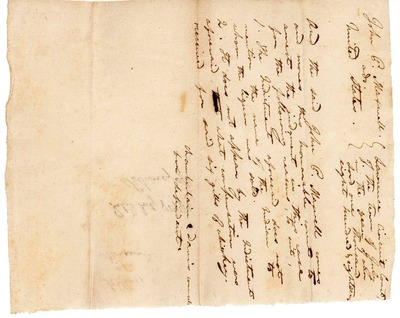