This is a penal title bond of six hundred dollars for John H. Bollinger giving eighty acres of land to James Lindsey; to be paid if Bollinger is unable to acquire the title from the United States government.

Land transfers such as is shown in this document may seem strange or rare, but in reality they were done regularly. Families would transfer ownership of land if some parts of the family were moving away, as a donation to churches or schools, and for many other reasons. Here we see John H. Bollinger, who was semi- or fully illiterate based on his inability to sign his own name, transferring land to James Lindsey. At the time, full or partial illiteracy was fairly common as education wasn't as accessible as it is today. Legal documents such as this bond were often written by a clerk, lawyer, or other third party to the transaction. The Lindsey family was a prominent family across early Arkansas, with individuals involved in churches and schools.

Know all men by these presents that I
John H Bollinger am hereby held and firmly
bound unto James Lindsey se---[senior] his heirs and assigns
in the penal sum of Six hundred Dollars of good
and Lawful money which payment well and truly
to be made I do hereby bind myself my heirs
and assigns, Provided nevertheless that if the above
bound John H,, Bollinger, Dose[sic] make or cause to be
- - - - - - Executes unto the sd.[said] James Lindsey s--[senior]
his heirs and assigns a good and sufficient Title infee[sic]
simple, in and to certain tract or parcel of land
lying in the East half of the south west quarters of
section No 4 Township No. 20 N. range No. 1 East
containing Eighty acres of land so soon as Title can be
procured from the United States without fraud or delay
then and in that case the above Obligation to be void
and of none effect otherwise to remain in full force
and virtue in Law or Equity in Testimony
whereof I have hereunto set my hand and seal
this nineteenth Day of january in the year of our
Lord one thousand Eight hundred and twenty four
John H. [his X mark] Bollinger
Attest
Wm[William] Jarrett
Carlton Lindsey
(back-top upside down)
[upside down writing] Territory of Arkansas
County of Lawrence
Columbia Township
Personally appeared before me the undersigned
a justice of the peace within and for the Township
aforesaid, The within named William Jarrett
and Carlton Lindsey whoes names. are subscribed to the
within bond, as witnesses to the same. and after being duly
Sworn for that purpose. Testifies and Says that they
Saw. John H Bolinger the within named oligor.[obligor] Sign
Seal and deliver the within bond to James Lindsey Sen[ior]
for the uses and purposes therein named and that day
the said William Jarrett and Carlton Lindsey were
requested to subscribe their names to the same as witnesses
to - - - due execution. of the same
sworn to and subscribd[sic] before me
This 15th day of March - AD 1828
Tho's[Thomas] Emory Justice of the peace
William Jarrett
Carlton Lindsey
(back-middle sideways)
[sideways writing] Title Bond
John H Bollinger
to
James Linsey[sic] sen[ior]
Exhibit (A)
Filed for record March 27th
1828
Reuben Richardson Clerk
Filed in clerk's office March 19th AD 1831
D W Lowe Clerk
(back-bottom)
Territory of Arkansas
County of Lawrence
Be it remembered that on this Twenty Eighth
day of March in the year of our Lord one Thousand
Eight hundred and twenty Eight. The within Bond was filed
for record which was accordingly on the same day duly
recorded in folio D pages 116 and 117
In Testimony whereof I have hereunto set my hand
and affixed the Seal of office at Davidsonville
on the day and year above written
Reuben Richardson Clerk 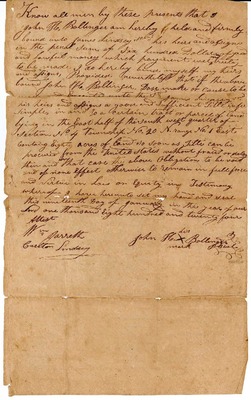