These court documents include the original complaint of John Kyler and James M. Kuykenall v. Richard Murphy and an execution of judgement that Richard Murphy owes John Kyler and James M. Kuykendall a sum of thirty dollars in damages and forty-eight dollars and six cents in court costs. Also listed are the individual costs and amounts received for court officials and witnesses.

Rivers were the highways of Frontier America, therefore boats and other forms of water transportation were valuable commodities. Keel boats are long narrow boats designed to carry cargo down river. They are smaller though similar to today's barges, and early settlers often travelled as far as New Orleans to deliver their goods. However, keel boats could only navigate down river and had to be towed to return up-river. In this case, John Kyler and James M. Kuykendall accuse Richard Murphy of retaining possession over a keel boat that they had paid Murphy to tow upstream.

[Page 1]
Arkansas Territory
Lawrence county
In the circuit court
of the first judicial district
of the term of July in
the year of 1820
John Kyler and James M Kuykendall
by - - - P. Hall their Attorney complains,
of Richard Murphey[sic] in a plea of trespass
on the case For that whereas the said
John Kyler and James M Kuykendall
heretofore towit on the twentieth day of
December in the year of our Lord eighteen
=hundred and nineteen at the county
of Lawrence aforesaid was lawfully
possessed as of their own property of cr[certain]
Keel Boat of great value towit of the
value of one hundred dollars lawful money of the united states and being
so possessed thereof; they the Said plaintiff.
afterward towit on the day and year
last aforesaid at the county aforesaid
camally[sic] last the said Keel Boat out
of their possession and the same
afterwards towit on the same day and
year last aforesaid at the county aforesaid
came to the possession of the said Defendant
by puling[sic] yet the said Defendant
well knowing the said Keel Boat to
(page2)
be the property of the said plaintiff's and of
Right to belong and appertain to them
but contriving and fraudulently inten
=eting[inteneting] craftely and subtly to deceive
and defraud the said plaintiffs in this
behalf hath not as yet delivered the said
Keel Boat to the said plaintiff's at the
often requested so to do, and hath
hither to wholly Refused so to do, and
afterward -awd on the day and year
last aforesaid at the county aforesaid
- - - - and disposed of the said
Keel Boat to his own use to the
damage of the Said plaintiffs
one hundred dollars and therefore
they bring suit.
-a--- P. Hall Atto.[Attorny]
The clerk of the circuit court for the
county of Lawrence will Issue a summons
on the foregoing declaration and
- - - - the same - - - section of
respasson the case sartsoner and
----rsion and CC
Jerud P. H---[Hall]
Att,o.[Attorney]
(page3)
Spring River Township Executed by Reading the
within summons to the within - - - Richard
Murphy June the Twentieth on thousand Eight
hundred and twenty Service " 80
Milage 1 " 20
$ 2 " 00
James ,M, Kuykendall D. Shff[seriff]
(sideways)
No. to July -- 1820
John Kyler and
James Kuykendall
v.
Richard Murphy
we the juorys[sic] find
for the Plaintiff
$30 Timothy Shaw
Fourman[sic][Front] Territory of Arkansas,
County of Lawrence
ss.
The United States of America to the
Sheriff of the County of Lawrence
Greeting:
Whereas, John Kuyler[sic] and James M Kuykendall at
our Court, of commin[sic] pleas before our Judges hath recovered against Richard Murphey[sic]
the sum of Thirty dollars damages
and also the sum of forty eight dollars and thirty six cents which
to the said John Kuyler and Jas[James] M Kuykendall were adjudged
for thier costs in that suit
expended as appears to us of record ; these are therefore to command you, that of the goods and
chattels, lands and tenements of the said Richard Murphy
you cause to be made the aforesaid damages and costs, and that
you have the same before the Judge of our circuit court on the second Monday of September
next, to render to the said Kuyler and Kuykendall the
damages and costs aforesaid. And for want of sufficient goods and chattels,
lands and tenements whereon to levy and make the same, we command you to take the said
Richard Murphy if he be found in your bailwick and
- - - [therein] safely keep so that you may have his body before the same Judge on the said 22
Mondy of September to satisfy the said Kuyler and Kuykendall
of the aforesaid damages and costs. And that
you certify to our Judge how you execute this writ, and have you then there this writ.
Witness Henry Sanfird[sic] Clerk of our said court
at Off---- this seventh day of August
in the year of our Lord on thousand eight hundred and 22
and of the Independence of the United States the 47th
Hy[Henry] Sanford Clerk.
(back)
Executed on the twelfth of august 1822 by levying[sic] on a ---, which was sold on the twenty
second day of said month, for eleven dollars and twenty five
cents __ invoice 1$ milage 2$ percentage $0.55 $3.55
James M. Kuykendall sbbfs--
Recd[record] of ---ferd one dollar the tax on the cnssined[sic] writ in this case R Searcy
(sideways)
No[number] 11. To September T.[Term] 1822__
Kuyler and Kuykendall
v.
Richard Murphy
Plea
Principal $30.00
natty Hall 1.00
Clerk Sanford 8 77
do[ditto] R Searcy 3.85 $11.62
Tax _____ 2.00
Witness Jonah Cravns 4.80
Elipes Davis ____ 6,10
Jerry ______________ 3.00
Sheriff ______________________13.84
This Executin[sic] 1.00
$78.36
Came to Hand 6th
of August 1822
Jas[James] M Kuykendall D shff
(upsidedown)
agreeably to returns or the alias Ex this execution is ----
to a credit of thirty One dollars August 6. 1822_
Hy Sanford clk
The following p----have recitid[recieved] as follows To wit
James M Kuykendall in full. Henry Sanford $4.50
Saml.[Samule] S Hall 4.50
Jonah Cravens in Full_____
Rec,o[Record] six dollars and twenty cents in full of
mu fees in this case __ Hy Sanford clk[Clerk] 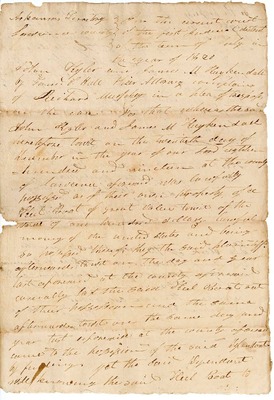