These documents detail the court proceedings between Benjamin Crowley and Benedict White, regarding a change in their agreement over a slave, and includes the original complaint filed by White through his attorney Chamberlain the following court term, because he believed the proceedings of the court to be irregular.

In the Ozarks, hiring out slaves for manual labor was a routine practice. In this case, an agreement was made between Benjamin Crowley, for whom Crowley's Ridge is named, and Benedict White. A five-year-old slave boy owned by Crowley was hired by White for five dollars a month until the November court. However, come November, White refused to pay the remaining balance due. Evidently, the two parties were able to come to an agreement for the slave boy to remain with White until December 25th in exchange for a promissory note and the cost of the court fees. In an interesting turn, in the July term of Court the following year, Benedict White's attorney named Chamberlain submitted a complaint stating that the proceedings of the previous December were irregular. Specifically, he alleges that there were extraneous costs for court services which had not performed.

[Page 1]
Territory of Missouri
County of Lawrence for Spring River Township.
The following are the proceedings in a case had before me a Justice of the Peace in and for the County aforesaid wherein Benjamin Crowley is plaintiff and Benedict White defendant are as follows - - - - -
That on the 18th day of August 1817 the said White got into possession of a negro boy belonging to Benjamin Crowley for which the said White was to give five dollars per month hire for the same which the said White confest [sic] was so until November Court first following for which Crowley had received three dollars and fifty cents the remainder still due which Said White refused payment to said Crowley and at November Court there was a new contract took place betwixt the parties which was proven by the oath of William Black that if the Said White would lift a note that was given to Wm. Hisc. [?] By said Crowley for seven dollars one dollar being paid on the note that the boy should continue to until said White was satisfied for the same which the boy continued from that time until the 25 day of December then said White returned the boy to said Crowley for which judgement [illegible] was entered in favor of the plaintiff for nine Dollars with Cost of suit.
Crowley } Justice cost $.75
Vs } Constable cost 1 - 7 - ½ [$0.071/2?]
White }
[Page 2]
This being an amicable action by consent of parties - - there being a summons granted some time before but no tryel [sic] had the summons not returned on the day appointed in the same and the parties not present. I do certify this a true copy of the proceedings had before me on the within case taken from my docket and the papers of the same. February 12/28 [?] 1818
Alex. Hodge
Justice of the Peace For a copy of proceeding certified fifty cents
Certified copy of proceedings
[Page 3]
Lawrence Circuit Court of the term of July 1818
Benedict White ags. Benjamin Crowley
And now the said Benedict White comes here into court by Chamberlain his attorney, and says that there is manifest irregularity and informality in the record and proceedings aforesaid of the said justice in there, to wit,
1. It does not appear by said record or proceedings that the parties were present at the trial.
2. It appears that the summons issued by the said justice in the cause aforesaid was never returned, and that the parties did not attend on the day of trial.
3. It appears by the record and proceedings aforesaid from the statement of the justice that they plaintiff had no cause of action.
4. The proceedings certified by said justice were such as would not justify said justice in giving judgement out against the said defendant.
5. It appears by the record and proceedings aforesaid that the service of the summons was allowed the constable in the judgement for costs, when said constable did not serve said summons. 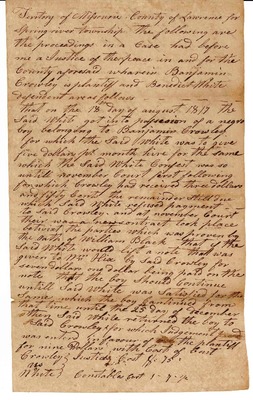