The first document is an indictment against Moses Graham for altering the marks on two hogs belonging to James Moore, who is deceased by the time of the court case.The second document is a recognizance in which Moses Graham acknowledges he is indebted to the United States in the sum of five hundred dollars if he fails to appear in court on the first Monday in November and abide by the Judgement of said court.

Hogs are a large staple of the livestock industry in Arkansas but prior to fencing laws, hogs were allowed to roam free. It was therefore necessary to identify who owned which hogs. Cutting a hog's ears was considered a relatively painless and safe way of marking hogs which did not reduce the value of the product. Today, pigs are identified still by ear notches, but also by tattoos, plastic ear tags, and implanted transponders. Each livestock owner was required to register the markings of their hogs with the county as a means to guarantee reimbursement should another person kill or try to take a hog as their own.

[Page 1] Territory of Missouri
County of Lawrence
In the Circuit Court
for said county of the Term of
June in the year One thousand Eight hundred and seventeen
The Grand Jurors empanelled charged
and sworn to enquire in and for the body of the
County aforesaid upon their oaths present and
say __ that one Moses Graham late of said
County on the fifteenth _ day of January in the
year of our Lord One thousand eight hundred
and Seventeen at the Township of White River
in the County aforesaid unlawfully and wilfully
took one white sow with black spots marked
with a crop off of each her ears and an under
bit out of the right ear and a slit out of the
Left ear of said Sow of the value of six Dollars
lawful money of the United States_ of the proper
goods and chattels of James Moore late of said
County deceased. also one other sow of a white
color marked in the same manner as above described
and of the price and value of six dollars like
Lawful money aforesaid - - - proper Goods and
chattels of the agoresaid James Moore deceased _
all then and there found and being _ And the said
Moses Graham so having the aforesaid sows
in his possession as aforesaid afterwards towit[sic]
on the same day and year aforesaid with force
and arms at the Township and County aforesaid
(page 2)
Unlawfully and wilfully did alter the marks of the
aforesaid Hogs_ by then and there falsely obliterating
and defacing the crop off of each of the ears of the
aforesaid sows, and the underbit out of the right
ears and a slit out of the left ears of said sows_
by then and there falsely making and marking a snallow[sic]
fork and under bit in the left ears of the said sows _ and by falsely
making and marking one under slope in the right ears of the
said sows..
by reason and by moars where of the crop off of each
of the left ears of said sows _ became and signified[sic] to be
a smallon[sic] fork and an under bit in the same can of said
sows_ and the aforesaid[sic] slit out of each of the left ears
of said sows became and signified to be the mark of a smallow fork
in the same _ and the aforesaid Bit out of each of the right ears
of said sows became and signified to be as mark of an under slope in
each of the right ears of the said sows.
with intent to defraud the heirs and representatives
of the said James Moore deceased __ Contrary to the
form of the - - - in such case made - - - provided
and against the peace and Dignity of the United
States of America, and of this Territory _
J. S. Hempstead
Cir[Circuit] Atty[Attorny] S. C
(page3)
We of the joury
find for the
Defndint[sic] not guilty
John p-dd-ll
Thomas Cu---
Number 7 (?) In November Term 1817
United States
v.
Moses Graham
Indictment
for altering
mark of
hogs
A True Bill
John L Lafferty
fore man
Filed 24th June 1817
Rich Searcy clk[clerk]
[Page 2] Territory of Missouri
Lawrence County
Know all men by these
presents I Moses Graham
or principle and Nicholiss[sic] Tramell and
Abraham Smally as his securities acknowledg[sic]
themselves in debted[sic] to the united states in the
sum of five Hundred Dollars good and lawful
Mony[sic] to be levied on our respective good chattles
Lands and tenements . we bind ourselves our
heirs Executors and administrators firmly by
these presents this 11th day of october 1817
The Condition of the above acknowledgement
Is as such whereas there has Issued out of the
Clerks office of the County aforesaid a Capias D---t
Commanden - - - to the Seriff[sic] Commanding
him to take the Body of Moses Graham
and have him before our Circuit Court of
said County at theire[sic] next Term to answer
an inditment[sic] for altering the marks of
Hogs now if said Graham be and appear on
the first day of our next Term to be holden
at Davidsonville on the first monday of november
next and there abide the Judgment of said Court
then this obligation to be voide[sic] otherwise to remain
--- in full force and Effect
(page2)
this day Came Moses Graham as principle and
Nicholiss[sic] Tramell and Abraham Smally as his
securitis[sic] and acknowledged the within ackowled=
=gement this 11th October 1817
George Ruddell J.S
U States
v.
Graham
Recognisances
Altering mark of
hoggs 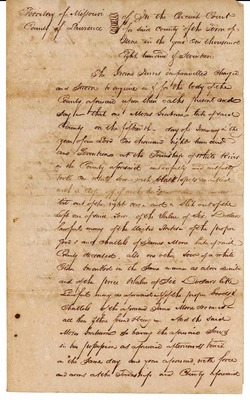