This is a Recognizance in the case against William Hix and Charlotte Piburn stating they owed the United States one hundred dollars, to be levied from their property unless they appeared in court at Davidsonville to answer to the indictment of fornication and to remain there until given leave.

The act of living in "fornication" or acting as man and wife when a couple was not legally married was considered a criminal offense at one point in Arkansas's history. In this case, William Hix and Charlotte Piburn were accused of this crime and were to be fined one hundred dollars if they did not show up in court to appear before a judge. 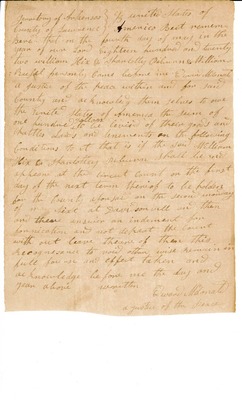