This document is a two-sided promissory note for the sum of forty-five dollars. The original note from 1806, is between Henry Cassidy and Henry Renick. In 1816, Henry Renick transferred the note to Eli Hillhouse.

Promissory notes are legal agreements between two parties indicating a promise to pay a certain amount of money to the holder of said note. The word "Judgement" is written across the original note, which indicates that it must have been used in a court case at some time. Henry Cassidy was a lawyer who worked in St. Louis and early Lawrence County.

(front)
Judgement (written across page in darker ink)
Due Colo Henry Renuk[Renick] forthyfive dollars
which I promise to send to him by Captn
Walker on his return from arKansas
Witness my hand the 30 Sept 1806
Henry Cassidy
(back)
I assure the within to Ely[Eli] Hillhouse
for value Recorded given under my hand this
31th[sic] of October 1816
Henry Renick
(sideways in faded print)
Cassidy notes
$45.00 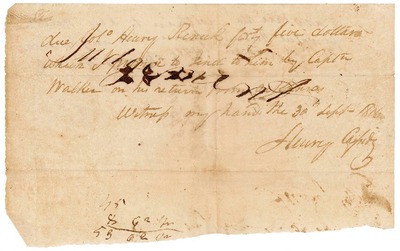