This civil suit of Wells v. Seawell and Murphy regards a debt that was filed during the Missouri Territory period but continued into the Arkansas Territorial period. Included is the original complaint of a debt unpaid filed by John Wells through his attorney Samuel S. Hale against Joseph Seawell and Richard Murphy, and the defendant's answer to the charge of debt, claiming that the original complaint is insufficient and doesn't obligate Richard Murphy to pay the supposed debt.

In 1818, John Wells sold land to Joseph Seawell and Richard Murphy for a sum of $341.37. From the documentation, it appears that neither man paid the debt to Wells. By 1819, Wells grew tired of waiting and took Seawell and Murphy to court to collect his money. Factoring in damages, Wells asked for $500 in his lawsuit which was a large sum of money in that time. What is most interesting about this case is found in the header on each page. Wells originally filed the suit during the March term of 1819 when Lawrence County was part of Missouri Territory. However, the defendants came to court to answer the complaint in the November term of 1819. By that time, Lawrence County had become part of the newly formed Arkansas Territory. It seems that even the clerk forgot as he crossed out Missouri and squeezed in Arkansas on the November term paperwork.

[Page 1] Missouri Territory, Lawrence County: In the circuit court for the county
aforesaid March term 1819
John Wells by Samuel S. Hall his attorney
complains of Joseph Seawell and Richard Murphy of
a plea that they under unto him said plaintiff the
sum of three hundred and forty one dollars and
thirty seven cents Lawful money of the United States
which to him they owe and from him unjustly
detain. For that which the said defendants on the
eleventh day of October in the year of our Lord one
thousand eight hundred and eighteen at the county of
Lawrence adoresaid and within the Jurisdiction of this
court made then certain and in writing signed with their
own proper names and seals with their respective seals
and now - - - to the court swear whereby on or before
the tenth day of November there next following they
or other of them promised to pay said John Wells the sum
of three hundred and forty one dollars thirty seven
cents - - - for value received-
Yet the said defendants or other of their attorney [though] often
requested so to do hath not paid the said sum of three
hundred and forty one dollars and thirty seven cents
above demanded or any part thereof to the said
plaintiff but the sum to pay or any part
thereof they said defedants or other of their hath
hereunto wholly refused and still both refuse to
the damage of the said plaintiff four hundred
dollars and therefore he brings his suit.
Samuel S. Hall, attorney for [plaintiff]
The Clerk of the Circuit Court will for the county of
Lawrence will please pen a capias ad responden
dum on the foregoing declaration and endorse
the same an action of Debt founded on a
- - - in writing and - - - back in the sum
of five hundred dollars. Hall for plaintiff
Missouri Territory Lawrence County: The United States of America to the
coroner of said county - Greeting
We command you that you take the within named Joseph
Sewell and Richard Murphy of they may be found in
your - - - and them safely kept so that you have
them lead on before the Judge of an circuit court to
be holden[sic] at the town of Davidsonville in and for the
county aforesaid on the fourth Monday of March in this
year of our Lord one thousand eight hundred and nineteen
then and there to answer unto John Wells of a plea of
Debt for three hundred and forty one dollars thirty seven cents
and have you then them writ.
- - - Richard Searcy, clerk of an said
central offive this 2nd day of March AD
1819 and of an independence the 43rd
Richard Searcy [signature]
No 19 To March Term 1819
John Wells v. Jos[eph] Sewell and Richard Murphy, decla[sic] Debt - - - $341.37, dam[ages] $400
Hall atty[sic]
This is an action of Debt
founded on a deed in writing
for $341.37 the [crossed out]
will like cash in the sum
of $500
Richard Searcy, [clerk]
[crossed out]
Filed March 2nd, 1819
Richard Searcy [clerk]
Come to hand
March the seven
th 1819
not found for
want of time
Joseph Harden
Coroner {Lawrence County]
Spring River Township
Execute April 9th
1819 by taking the
body of Richard Murphy
in costuty[sic] and Rubin
Melsets
became his bail
Joseph Hardin, [Sheriff]
L- - - $1
milage[sic] $1
bond $0.50
[total] $2.50 [Page 2] John Wells v. Joseph Seawell and Rich Murphy: In the Circuit Court of Lawrence
County Arkansas Territory and in
the November Term year eitheen
hundred nineteen-
to wit
And now the said Richard in Court by his attorney
defends the wrong and injury which and - - -
oye[sic] of the said Deed of the said plaintiff declared on by
him in said deed or above [crossed out]
and it is read to him in the words and figures following to wit
We or either of us promise to pay John wells three
hundred and forty one dollars thirty seven cents
on or before the tenth day of November for value Rec'd[sic]
of him this 11th of Oct 1818 Joseph Sewall
Reuben Mittsef, Richard Murphy
All of which being read and heard the said Richard says
that the said plaintiff's declaration and matters there in court
[cl]aimed are insufficient in cause for the said plaintiff to have
and maintain his aforesaid action thereof against the
defendant nor is he bound by the law of the
land to answer there to all of which he is ready to - - -
wherefor[sic] and or want of a sufficient declaration
in This behalf defendant aforesaid prays judge
ment it said plaintiff - - - to have and - - -
his aforesaid action thereof against him.
J Rannee attorney
for Richard Murphy 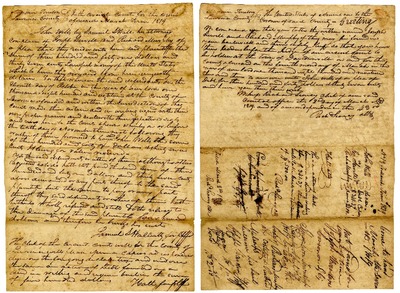