This is a judgment issued in the Arkansas Territory in the court case of Samuel Hall v. James Ball, which involved the payment of a debt.

[Side 1] Territory of Arkansas To the Sheriff of the County of Clark
United States of American Greeting:
Whereas Samuel L. Hall at our Circuit Court in vocation before
the clerk of said court
recovered against James Ball the sum of twenty nine
dollars and also the sum of [illegible] dollars
which to the said Samuel L. Hall were adjudged
as well for his damages as for his costs in that suit expended
as appears to us of record: These are therefore to command you, that, of the goods and chattels, lands and
tenements of the said James Ball you cause to be made the aforesaid
twenty nine dollars damages and costs, and that you have the same before the Judge
of our said court on the 2nd Monday of September next, to render to the said Samuel
L. Hall in the sum of twenty nine dollars and costs aforesaid. And for
want of sufficient goods and chattels, lands and tenements, whereon to levy and make the same, we command
you that you take the said James Ball if he be found in your bailiwick
and him safely keep, so that you have his body before the same Judge, on the said second Monday of
Sept next to satisfy the said Samuel L. Hall of the aforesaid
damages and costs; and that you certify to our Judge how you execute this writ, and
have you then there this writ.
In Testimony whereof, I have set my hand as Clerk, and affixed my
[illegible words] of office this 18th day of May 1826, and of the Independence
of the United States the 50th
[illegible initials] Clerk
[Side 2] Come to hand on the 18th May 1826
[illegible word] on the 22nd May 1826 H W Carter Dep Sheff
Amount of sale twenty seven dollars
twelve and one half cents the cost m[illegible]
and thirteen dollars twelve and one half
cents of the princible[sic] this 10th day of June
1826 fees on this execution
for levering one dollar H.W. Carter Dep. Sheff
milage[sic] 68 miles 3 dollars 40 cents
[illegible] one dollar forty cents
[illegible]on the 8 august 14, 26 sale on the 19 august 1826
Satisfied on the 19t August
1826
James Miles Sheff
Sam L. Hall
v. Execution No. 1
James Ball
Debt $29.00
[illegible] cow or calf $12.00
Balance $17.00
Atty Oakley [illegible] 6.00
Clerk D[illegible} fees 3.00
Amt $26.00
[illegible] 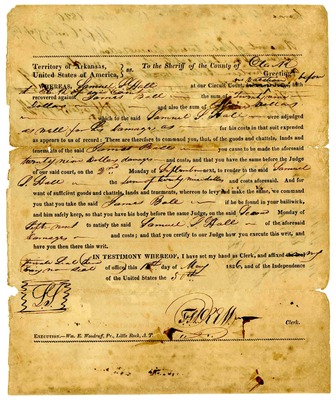