This indenture contracted Henry Jones, an orphan, to serve as an apprentice to John Cline, a farmer, until the age of 21. During that time, Cline was obligated to teach Jones about farming and provide room and board.

Indentured apprenticeships were the original vocation educations. Young adolescents, often orphans, would sign a contract to serve their master or mistress for seven years. During that time, they'd receive on the job training in a profession like farming, blacksmithing, weaving, tailoring, millinery or other valuable skills. Henry Jones was orphaned in 1822 and the court appointed Joseph Hardin as his guardian. Hardin in turn found a farmer, John Cline, who was willing to take on 13 year old Henry as an apprentice.

This indenture made and executed this
fourteenth day of May in the year of our Lord one
thousand eight hundred and twenty two - between
Joseph Hardin of the one part and John Cline
of the other part witnesseth[sic] that whereas said
Joseph Hardin hath this day been appointed
and approved by the court as the guardian
of a minor called and known by the name
of Henry Jones (under the age of fourteen years)
and whereas it is ordered by the court that
said Jones be bound and apprenticed to some
suitable person during his minority therefore the
said Hardin as Guardian of said Jones and
by virtue of said order binds the said Henry Jones
as apprentice to John Cline until he shall
arrive to the age of twenty one years and
the said John Cline doth[sic] covenant and
agree on his part that he will receive said
Henry Jones as apprentice as aforesaid and
that he will teach the said Henry Jones as
apprentice as aforesaid the business of farming [crossed out]
the said John Cline
shall also provide said Jones during the time
aforesaid with sufficient meat, washing, lad-
ing and clothing during the time aforesaid
And it is expressly - - - by and between
said Hardin and Cline that said Henry Jones
is at the time of the executing of this indenture
of the age of thirteen years and nin months
In testimony whereof the
Said Hardin and Cline have hereunto set
their hands and seals the day and year
aforesaid
Sealed and delivered in presence of Robert Rogers
John Moore
Joseph Hardin
John Cline 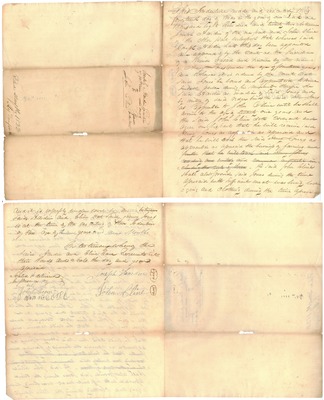