This is a sworn statement from William Woodruff, editor of the Arkansas Gazette, stating that the advertisement for the defendants, Bernard Rogan and Jesse Check, to appear in court ran for nine consecutive weeks in the newspaper.

The Arkansas Gazette was established in 1819 by William E. Woodruff. The Gazette was appointed as the public printer of the federal government for the Territory of Arkansas. This meant, among other things, that public advertisement of court cases was published in the Gazette. When Bernard Rogan and Jesse Check failed to appear at their foreclosure hearing, William Hix's attorney filed to have the case advertised. Upon approval of the court, the ad was run for nine weeks, warning Rogan and Check to appear in the next term of court.

[Clipping] Territory of Arkansas, ss.
In the Court of Common Please, County of
Lawrence, February Term, 1821.
William Hix, v.
Bernard Rogan and Jesse Check
On petition to foreclose a mortgage,
the said Defendants being solemnly
called, came not - whereupon, on motion
of the Plaintiff, by his attorney, it is or-
dered, that the publication be made agreeable
to law, notifying the said Defendants
that, unless they appear on the first day
of the next Term of this Court, and pro-
ceed to trial, that a decree will be enter-
ed against them
By order of the Court
a copy - teste[sic]
Hy. Sanford, Clk.
March 10 - 17-9w pr's fee $7.50
[Handwriting] Editor of the â€œArkansas Gazetteâ€
Wm. Woodruff being duly sworne[sic]
deposit[sic] and saith[sic], that our advertise-
ment for foreclosure of a mortgage
in the case of Wm. Hix v. Bernard
Rogan and Jesse Check (of which
the subjoined[sic] is a correct copy)
has been published for nine weeks
in succession in the "Arkansas Ga-
zette" commencing March 18, 1821.
William Woodruff
Sworne[sic] and subscribed to before me
this 17 day of May 1821 C.T. Louis Justice of the Peace
William Hix
v.
Bernard Rogan and
Jesse Check
Samuel S. Hall, attorney
prs fee $7.50 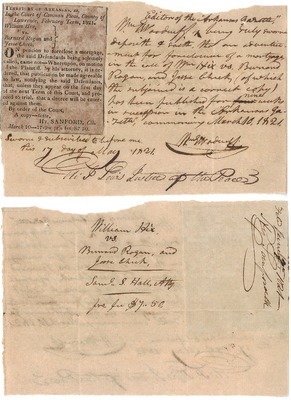