Benjamin Crowley is being granted the right to administer the estate of his son, John Crowley, who died without a last will and testament. Letters of administration appoint appropriate people to deal with a deceased person's estate, particularly when there is no will or named executors.

In 1816, John Crowley, at age 16 died leaving no will. His father, Benjamin Crowley, for whom Crowley's Ridge is named, assumed control of John's estate. John was his third son and while it may seem strange that a 16 year old had his own estate, this wasn't unusual for the time. The Crowley family was wealthy and settling into a new territory. It's possible that John went ahead of the family to scout out the area in advance or perhaps he wanted to establish a farm since he would likely inherit very little from his father. During the early 19th century, the oldest son usually received the largest part, if not the whole inheritance. 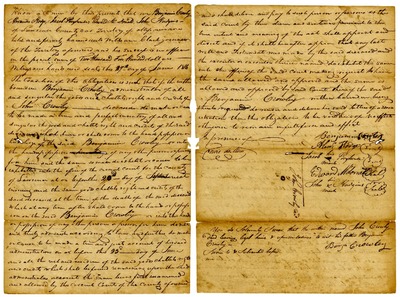