The State of Arkansas v Dave Dan, a Free Negro

This is a court case called by the State of Arkansas against David (Dave) Dan, a free man of color, for not entering into a bond at the time of his freedom and continuing to reside in the state of Arkansas.

Prior to the end of slavery, any free person of color in Arkansas was required to enter into a bond with the stated effect of ensuring they would not become a burden to the county or state in which they resided. Under the terms of the bond, they also had to agree that they would not cause financial or physical harm to any person, to maintain their status as "a free negro."

State of Arkansas
County of Lawrence } ss
In the Lawrence circuit court at
the November Term AD 1857
The Grand Jurors of the State of Arkansas duly
impannelled sworn and charged to enquire[sic] in
and for the county of Lawrence in said State
upon Their oath present that Dave Dan
a free Negro
late of the county of
Lawrence in said state resided in the State of
Arkansas and in the county of Lawrence
on the first day of March AD 1843
and wholy[sic] neglected and failed to file
enter into bond to the State of Arkansas
on or before the 1st day of July 1843. with
good and sufficient security for the use
of any county or of any person that may be
dammfied by such free negro in any
sum not less than five hundred dollars
before the clerk of the county court. conditioned
according to Law for the good behavior of
such free negro in case he should at any time
thereafter be unable to support himself and
became chargeable to any county in this state
and also to to[sic] pay and make good to any
person in this state and injury or loss which
they might sustain either in person money
or property of every description by the
wrongful acts or misconduct of said
free negro.
And afterward to wit on the tenth day of January
in the year of our Lord Eighteen hundred
and fifty Seven with force and arms in
the county of Lawrence aforesaid, the Said
Dave Dan ^free negro as aforesaid resided in Said county of Lawrence
and has continued to reside in said county
without haveing[sic] given bond as the law
directs. on or before the 1st day of July AD
1843 or at any time Since said court
day with conditions according to Law but
yet remains and resides in said county without any bond as required by law
contrary to the - - - by no statute in Such
case made and provided and against
the peace and dignity of the state of Arkansas
W K Patterson
Attorney for the State
[upside down writing] We the Jury find the Defendant gilty[sic]
and assess the fine to 1 cent and 1 hour
imprisonment and 1 hour
M Israel forman
[sideways writing] No[number] 13
State of Arkansasvs misdemenor
Dave Dan
(A free negro)
A true bill
Charles D Hollingsworth
Foreman of the grand
Jury Nov[November] 1857
Witnesses
J N Hillhouse
G P Nunn
W.M. Fisher
Filed Nov 18th 1857
J N Hillhouse clk[Clerk]
State of Arkansas
County of Lawrence
}SS.
The State of Arkansas,
To the Sheriff of the County of Lawrence Greeting
We command you that you take the body of Dave
Dan(a free negro --
if he may be found within your bailiwick, and him safely keep, so
that you have his body before the Judge of our Circuit Court of Lawrence
county, at a court to be holden at the court house in
and for the county aforesaid, on the Second Monday of May 1858
then and there to answer the complaint of the state of Arkansas to
an Indictment - - - against him for
living in the state of Arkansas as a free negro
without giving bond for his good behavior accor-
ding to law
and have you then and there this writ.
In testimony whereof, I have hereto set my hand, as clerk
of said circuit court and affixed the seal of office, this
28th day of December 1857 and of the
year of the Independence of the United States the__
J--- N Hillhouse Clerk.
State of Arkansas
County of Lawrence
I certify that I executed
the within writ by arresting the within named Dave
Dan on the 2th[sic] day of April 1858 and then and there read the
writ in his presence and hearing and he then and there
entered in to band for his appearance at the next
term of and[the] Lawrence Circuit Court at its May Term
1838 with Cham G Stuart as his security in
the sum of $200.00 which bond herewith
returned to said court this April the 3th[sic] 1838
G C Steadman sheriff B F Matthas Deputy Sheriff
[Sideways writing] State
vs}
Dave Dan
--- May term 1858
Bail required in the
sum of $200.00
J N Hillhouse clk[clerk]
S--- 50
Bond 25
Mileage 66
Return 25
$1.66
filed May 8th/58
J N Hillhouse clk

W.K. Patterson, Attorney for the state. 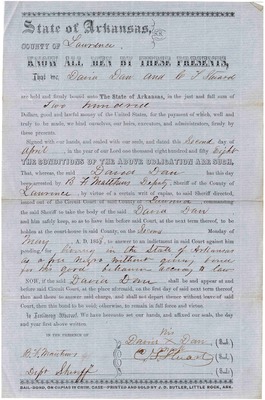