Letter from William Rector and Louis Rector to Annie Rector Copeland. The first part of the letter is written by Annie's father, William, and the second part is written by her brother, Louis.

Little Rock Dec 29th 1878
Dear Daughter
I drop you these
few lines to let you know
that we are all well. Your
Mama started to Mobile on
Friday night last to see
about Georgia and Daisy.
She has been anxious to go
for several weeks so she thought
that she would take the advant-
age of this cold snap that
she would not be so apt to take
the yellow fever, what do you
think of little Louis writing[?]
I think he does first rate
for a little one arm boy, he
writes much better on the
slate than on paper[.] he [sic] says
he is the bester writer in his
class[.] Did you receive Will's
Crhistmas present[?] I am sorry
that you and Copeland could
not be with us on Christmas
I was in hope to have
the whole family together
on that day[.] Elias and
Mary were with us on (?)
day[.] we [sic] had a nice dinner and
we all enjoyed it so much
but we don't know where we will
all be on next Christmas. that [sic]
was my reason for wanting
to have you all with me
one time more in this life
I expect you (?) will be
home in 10 days. Robt Keatts
was buried today from the
B(?) St Church[.] Wm Caldwell
died last night. his [sic] funeral
will be at Bethel Church this
evening[.] your Father

Little Rock Ark Dec 29th 1878
Dear Sister
I write to let you know
that I am well[.] Mama went to
Mobile to see Georgia and daisy[.]
Sister I want you to come home
and teach me[.] it [sic] is to [sic]
cold for me to go to the schol [sic]
house[.] tell [sic] Mr Copeland
he must come to see me[.] Santa
Clause [sic] gave me a
little toy pistol and a
horn and a Christmas tree
full of good things[.] Sister you
must xcuse [sic] bad writing
as this is the first letter
I ever wrote[.] kiss Will for me
good bye from your brother
Louis G. Rector
ps Pa sends love to you
and Mr Copeland
Write soon 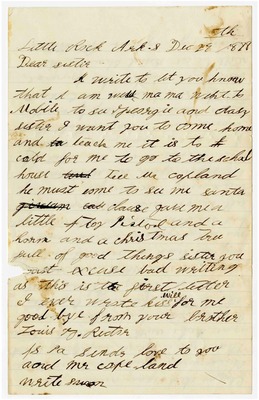