Letter from Louis Rector in Little Rock to his sister, Annie Rector Copeland.

Little Rock Sept 6th 1877
Dear Sister
I have returned home and now write
you a few lines to let you know
how I am and how I enjoyed
my trip. I enjoyed my trip splendid
I had a very nice time. I brought
me a mocking bird and two turkeys
and have got a nice pig. how[sic] is
Mr Copeland and when you go to
house keeping I want you come
after me. Charley says he want
you to send him a big stick of
candy. I did this printing.
Your dear Brother
Louis Rector 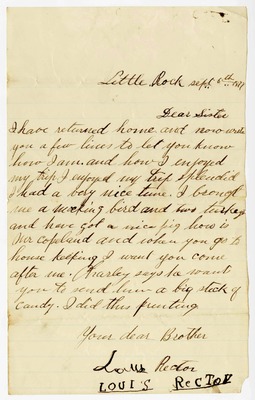