Letter from Lewis Rector in Little Rock to his sister, Annie Rector Copeland in Marion, Arkansas.

Little Rock Ark
Sept 4 1875
Dear Sister it is with
Pleasure that we write
you these few lines to
to[sic] let you know that
we all have been well exc-
ept John [who] has fever[.] we all
are well now. We fixed your
little Wagon[,] what Carrie McN(?)
gave you but Lewis broke
it. your[sic] toys are here at home.
Lewis say tell Mr Copeland
to have him a Pony to
ride[.] Carrie Johnson is come
back[;] you wont[sic] be here.
All send love[.] Corene send
love Respective
Yours
Lewis Rector 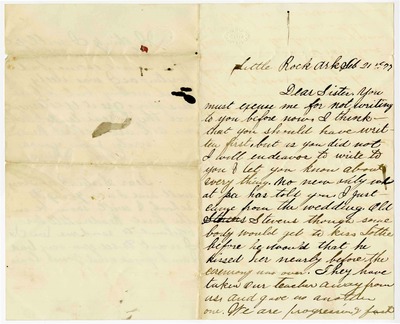