The 1836 Arkansas Constitution was the first of Arkansas's constitutions, created during the push for Arkansas's statehood. It is written on four pages, front and back. It outlines the basic laws of state government and defines the rights of Arkansas citizens.

The question of Arkansas statehood surfaced in the early 1830s as the territory's population grew, but many felt that the economic strain the new state would face from the loss of federal funds would be financially crippling. Some feared that Arkansas statehood might be premature.

When Ambrose Sevier, a territorial delegate to Congress, learned Michigan planned to join the Union, he saw an opportunity. To preserve an even number of free and slave states, Arkansas needed to be paired with a northern territory. On December 17, 1833, Sevier introduced an unsuccessful resolution in the U.S. House of Representatives to investigate the possibility of Arkansas seeking admission to the Union. Although representatives attempted to admit both Michigan and Arkansas during 1834-1835 sessions of Congress, on March 4, 1835, Congress adjourned with neither territory joining the Union.

Sevier abandoned the idea of asking Congress for permission to draft a state constitution and turned to the "constitution in hand" approach. After much debate, a constitutional convention opened in Little Rock on January 4, 1836. The meeting took place in a church, since the territory had no capitol building. Delegates adopted a new state constitution on January 30, 1836, and a copy was sent to Washington, District of Columbia, for Congressional approval. After much political maneuvering, President Andrew Jackson signed the Act that admitted Arkansas as the twenty-fifth state of the Union on June 15, 1836. 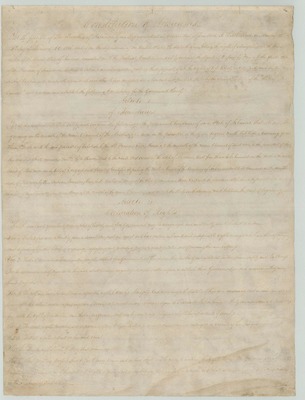