The Constitution of the State of Arkansas: framed and adopted by the convention which assembled at Little Rock, January 7th, 1868, and ratified by the people of the state, at the election beginning March 13th, 1868.

As the Civil War came to an end in 1865, a new era began. Reconstruction was a time of great political, social, and economic upheaval in Arkansas. President Lincoln authorized the military to allow states to begin establishing governments, but the United States Congress did not allow Arkansas's first Reconstruction-era congressmen and senators to participate in proceedings at the capitol.

Following the passage of the First Reconstruction Act in 1867, General E.O.C. Ord oversaw voter registration in militarily-governed Arkansas. By the time a new constitutional convention was held the following year, scalawags and carpetbaggers controlled the political scene. Both factions were considered to be "Radical Republicans," and they dominated the convention. Between January 7 and February 14, 1868, delegates met in Little Rock to create a new constitution. The document they crafted went before voters in March, but former Confederates had little impact in the decision to approve the constitution, since they were not allowed to vote. In essence, carpetbaggers, scalawags, and African Americans controlled the election and the government. Former Union general Powell Clayton was elected governor, and James M. Johnson, lieutenant governor.

Following congressional acceptance of the election's results and the new constitution on June 22, 1868, military rule ended in Arkansas and the state returned to the Union. Arkansas's 1868 Constitution contained many new provisions. While the state's first three constitutions varied little, the new document imposed several major changes. The 1868 Constitution continued a four-year term for the governor, added the office of lieutenant governor, and established greater power within the executive branch, weakening local control. Forward-thinking provisions promoted railroad construction, encouraged immigration, promoted economic development, protected the rights of African Americans, and created a state system of public schools. Alternatively, the new constitution prohibited changes to voting districts until 1876, made the amendment process difficult, and established strict criteria for voter eligibility, assuring that ex-Confederates did not regain power.

The new document called for the equality of all persons and that no citizen could be deprived of any right "on account of race, color, or previous condition." African American males were given the right to vote. Women could own and dispose of property. An education system brought uniform standards and offered all students an opportunity to attend school, regardless of color. Another educational improvement established a state-supported university in Fayetteville.

While portions of the new constitution took positive steps toward the future, the state failed to support the new initiatives over the long-term. In the aftermath of war, the disfranchisement of former Confederates created ill will throughout the general population, resulting in turmoil and violence. 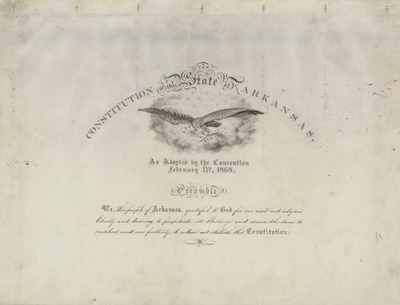