Western Union telegram sent from A.J. Wheat, Little Rock to Colonels Flournoy or Harris, Pine Bluff on May 14, 1874 during the Brooks-Baxter War in Arkansas. Wheat described the actions of the legislature and added the fact that they had ordered five thousand copies of Baxter’s speech made. 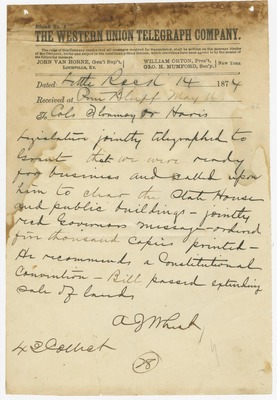