Western Union telegram sent from Major General R.C. Newton and W.N. Portis, Little Rock, to Colonel T.C. Flournoy, Pine Bluff on May 12, 1874 during the Brooks-Baxter War in Arkansas. Newton reports some minor skirmishing near the state house and that Brooks supporters are removing records from the State House in preparation for abandoning it. 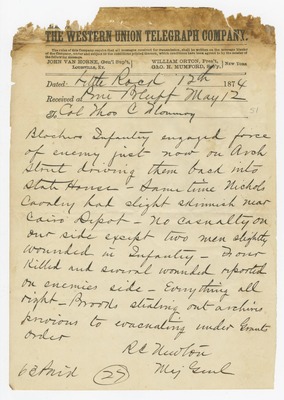