Western Union telegram sent from Governor Elisha Baxter, Little Rock, to Brigadier General H. King White, Pine Bluff on May 9, 1874 During the Brooks-Baxter War in Arkansas. Baxter warns White that a former U.S. Deputy Marshal named Sheldon is on his way to Pine Bluff to capture or kill him. 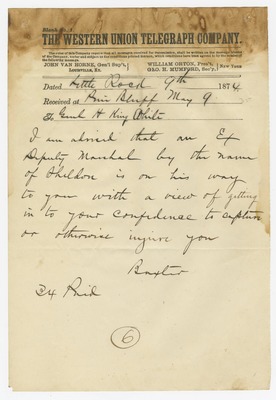