Western Union telegram sent from Major General R.C. Newton, Little Rock, to Colonel T.C. Flournoy, Pine Bluff on May 9, 1874 during the Brooks-Baxter War in Arkansas. Newton warns Flournoy to tell general White that an assassin may be coming down from Little Rock to kill him. He also expresses confidence that White’s troops will enable the Baxter forces to quickly capture the State House and win the war. 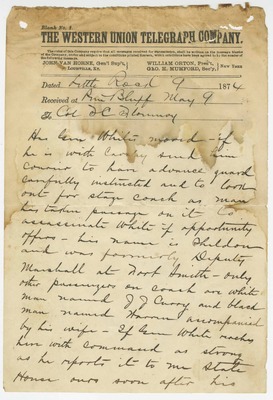