Western Union telegram sent from Major General R.C. Newton, Little Rock, to Brigadier General H. King White, Pine Bluff on May 8, 1874 during the Brooks-Baxter War in Arkansas. Newton warns that Brooks’s saboteurs may cut the telegraph lines and admonishes White to arrive as quickly as possible. He also reports on the success of operations on the Arkansas River and the arrival of reinforcements from Woodruff County. 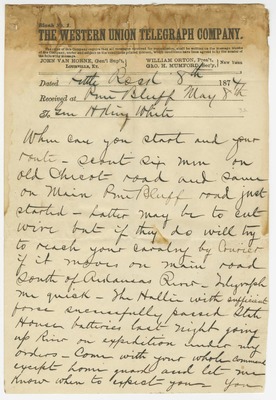