Western Union telegram sent from Major General R.C. Newton, Little Rock, to Brigadier General H. King White, Pine Bluff on May 8, 1874 during the Brooks-Baxter War in Arkansas. Newton says that a Supreme Court Decision “fell flat,” but that he still wants White and his soldiers in Little Rock for the Baxter forces main push on Saturday night. 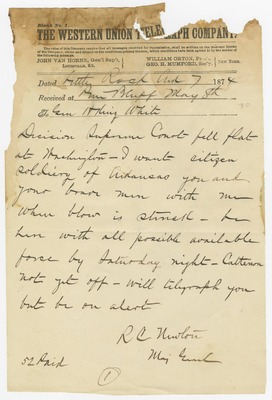