Western Union telegram sent from Major General R.C. Newton, Little Rock, to Brigadier General H. King White, Pine Bluff on May 7, 1874 during the Brooks-Baxter War in Arkansas. Newton asks whether White is coming by land or water and informs him that the Brooks forces are getting desperate as it seems like the government in Washington D.C. will not support them. 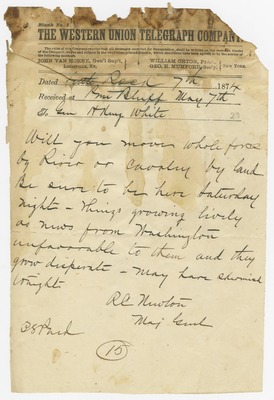