Western Union telegram sent from Major General R.C. Newton, Little Rock, to Brigadier General H. King White, Pine Bluff on May 4, 1874 during the Brooks-Baxter War in Arkansas. Newton reports on the situation in Little Rock, requests more infantry, and says that he will notify White when and if Robert Catterson is able to move against him. 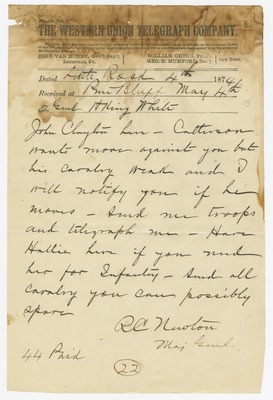